-Fuchu city, the place for interplay among nature, town and people-

Nishifu’s Spring is selected for one of the Tokyo famous 57 springs.

Fuchu city has many of the conditions desirable for our living environment such as water, greenery and well-developed cultural institutions, complete administrative services and warm-hearted people. According to the questionnaire conducted by the city, most of the citizens answered “They want to continue to live in the city in future.” which shows that how good the place is to live and how much local citizens like it.

Fuchu city is located at the central part of Tokyo and it was a prosperous city as a central place for politics, economy and culture since the ancient provincial capital was located after the Reformation of Taika( 645 A.D. ).
Fuchu city is a base point for traffic system for trains and roadways linking to nearby cities of four cardinal points. And it is well-known as the place which attracts many business offices for large corporations and for reputable hospitals and public facilities as a metropolis in Tama area. 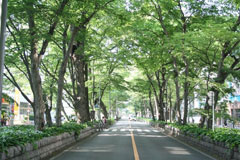 There are many big parks surrounded by beautiful nature such as ” Kyodo no Mori or local forest”, ” the Fuchu forest park” and “the Asamayama park”. And a lot of people including local and out-of-town visitors visit such public facilities as “Forest Art Theater of Fuchu”, libraries, galleries and museums.

“Zelkova tree-lined street of Baba Daimon” might well be called the symbol of Fuchu city and it is said that the history goes back to the Nara Period. A lot of people gather every day at the center of the city where large department stores and many other shops are located and a variety of events are held all the year-round. As the zelkova tree-lined street symbolizes, one of the biggest attractions is “Contrasting co-existence with advanced urban function and environment of rich nature.” 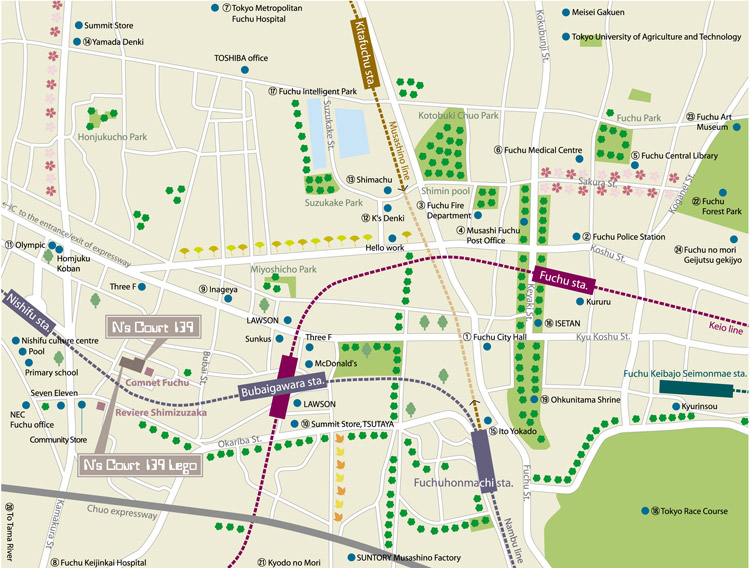